Scientists Want to Send These Shape-Shifting “4D” Objects Into Space

Researchers have developed a new method for creating “4D” shape-shifting structures that could one day be used out in space – that extra fourth dimension being the way they alter their form after being manufactured with only a temperature change.

With the cost of getting gear up into space so high, structures that can stay compact in flight and then expand when out in orbit could be very useful. The technique could also be used in biomedical applications.

The team from the Georgia Institute of Technology adapted standard 3D-printing techniques to build structures that shift their shape in reaction to temperature changes, based around the principle of tensegrity – using the constant tension between a series of cables and rods to maintain structural integrity.

“We believe that you could build something like an antenna that initially is compressed and takes up little space, but once it’s heated, say just from the heat of the Sun, would fully expand,” says one of the researchers, Jerry Qi.

The team has also put together a video of the reforming process, which you can see below:

Central to the new objects are shape-memory polymers, materials that can take on one form, get bent out of shape, and then return to how they were originally – very handy for packing inside the close confines of a space capsule.

In this case the struts are hollow so they can be temporarily folded flat. Elastic cables, also made with 3D printers, are attached to the end of the struts to keep them together and provide tension when the objects are expanded.

Heating up to 65 degrees Celsius is required to flatten and fold the objects, which keep their shape after they cool down. To return to their original form, reheating is required.

“Tensegrity structures are extremely lightweight while also being very strong,” says one of the team, Glaucio Paulino. “The goal is to find a way to deploy a large object that initially takes up little space.”

What makes the science part of this so tricky is controlling the way the structure expands. If it happens too quickly, or the struts expand in the wrong order, you’re left with a mess of materials that’s no use to anyone.

To make sure this doesn’t happen, the scientists built each strut to respond to a different temperature, enabling them to manage the order that they reassembled in.

If the idea of tensegrity has intrigued you, you can find plenty of examples of it out in the real world: take a look at this pedestrian bridge in Brisbane, Australia, or the roof of the Georgia Dome stadium in Atlanta.

In this case the team says soft robots, exploratory spacecraft, or deep space communications equipment could be built using the technique. Closer to home it could also help with inserting stents inside the body, small tubes that help restore blood flow.

We might have to wait a while to see them out in orbit though: as TechCrunch reports, the researchers are busy working out how to scale up the technology and make it capable of lasting through more transformations. Still, the early signs are promising.

“These active tensegrity objects are very elegant in design and open up a range of possibilities for deployable 3D structures,” says Paulino.

The research has been published in Scientific Reports. 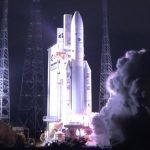 The ‘SELPIC’ Printer Prints Imagery, Text and More on Any Surface

These 1HydroNation Bottles Increase the Hydrogen Content of Water