An increasing number of offices are adding greenery to their environments, finding it a good way to reduce stress among employees and enhance their corporate image to make them more attractive to potential recruits.

Adding green not only means the introduction of indoor plants but also involves various original and creative designs that seem to have an impact on employee wellbeing.

Nextbeat Co, an information technology startup founded in 2013, has a vine tree covering a 2.5-meter-diameter ring hanging from the ceiling of the entrance at its head office in Tokyo.

“You can see greenery everywhere,” said a woman visiting the office, referring to the green spaces on each floor. The sun appears to shine brighter due to the presence of plants.

In the lounge where employees relax, a tree dubbed “everfresh,” which survived a typhoon in a forest in Okinawa in the southernmost prefecture of Japan, stands as a symbol of company vitality.

“Greenery helps employees feel refreshed and improves concentration,” Akane Hosokawa, a 34-year-old public relations official for the company, said. When a customer visits the office, “the greenery is often the first topic of conversation,” she added.

Among the 60 new workers who joined Nextbeat in April, some attributed their choice to the green office environment.

Companies are paying greater attention to working environments as they have been legally required to screen for stress-related illnesses since December 2015. They are finding that the promotion of employees’ health by adding plants to the workplace reduces stress and increases their productivity.

Following the global financial crisis caused by the bankruptcy of U.S. financial services company Lehman Brothers Holdings Inc. in 2008, many companies removed indoor plants from their offices to cut costs, according to Daiichi Engei Co, which creates green environments in offices and commercial facilities.

Recently, however, the introduction of greenery is increasing as part of work-system reforms.

A demonstration experiment led by Kahori Genjo, an associate professor at the Graduate School of Engineering of Nagasaki University, found that the indoor presence of greenery relaxes people and eases their drowsiness or discomfort because it stimulates the parasympathetic nervous system — sometimes called the rest and digest system — in the autonomic nervous system.

Daiichi Engei not only offers interior designs to create a green office, but it also suggests environments combining aromas and calming sounds — birds chirping on Yakushima, an island in Kagoshima Prefecture known for its wildlife and cedar forests, and the Shirakami Sanchi mountain range in northeast Japan, along with the sound of murmuring creeks.

Prime Assistance Inc., a Tokyo-based provider of roadside assistance services, maintains a green reception area and customer call center and farms out the management of plants to experts who water and trim them or replace them twice a month.

Although the service costs around 200,000 per month (about $1,800), the green environments “contribute to business activities by facilitating discussions among employees,” a company official said.

Genjo, the associate professor, encourages companies to even use cheaper artificial plants that can have similar employee benefits.

“Although it is costly to maintain and care for natural plants, using artificial foliage plants still generates definite favorable effects,” she said. 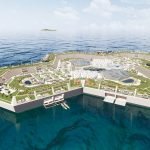