To help address a recent rise in bicycle accidents, cycling traffic laws were strengthened this year, with one of the violations covered being riding a bike while intoxicated.

But how do you know if you are too drunk to ride?

Koowho’s new bicycle lock is a funny-sounding idea, but one that should help stop the inebriated getting on the saddle. Connected to the user’s smartphone via Bluetooth, the Alcoho-Lock has to be opened via an app. But to actually unlock it, the user also needs to blow onto an alcohol detector embedded at one end of the lock. It won’t stay locked if it detects alcohol, but it will send an alert to a family member or partner and let them know the amount of alcohol detected in your breath as well as warn them that you’re about to get on a bicycle.

The idea is that partners or family members will then call the user and persuade him or her to either push the bicycle home, or leave it elsewhere to pick up later. 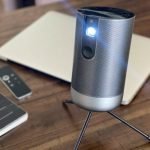