Yamaha Corp has developed a technology that has the potential to reproduce the drum performance of a musician like Ringo Starr at home.

The technology, “Real Sound Viewing,” reproduces the performances of famous artists by making input signals of a device called a “reproducer,” which vibrates a musical instrument based on sound source data of actual performance. In the demonstration at the IFA, a drum set and contrabass were played by using the technology.

The new technology consists mainly of (1) a part that produces vibration data from sound source data (the data are input into the reproducer), (2) the hardware of the reproducer and (3) the method to attach the reproducer. They cannot be realized without knowhow of a musical instrument maker.

As for the reproducibility of performance, Yoshiyuki Tsuge, director of Yamaha Design Laboratory, said, “Even an actual artist was surprised, saying that it is almost his/her performance.” It is possible to reproduce a live performance by using sound source data of an artist owned by a record company, according to Yamaha.

“We will possibly be able to reproduce performances at the Grammy Awards ceremony worldwide,” Tsuge said.

This time, Yamaha demonstrated a prototype of the Real Sound Viewing. Though the company aims to commercialize the technology, it has not decided a release date, etc yet, the company said. 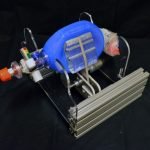