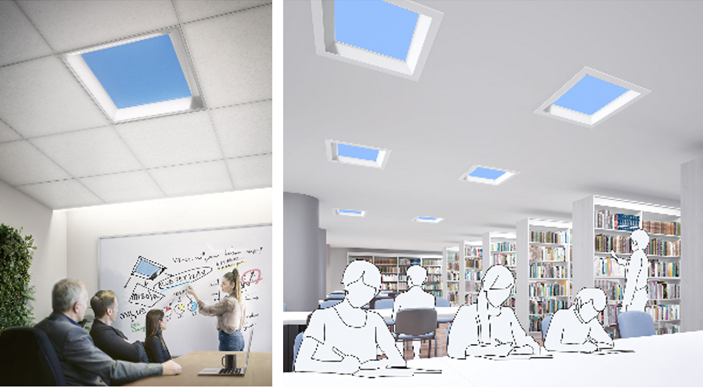 Simulated sky slice might actually be better suited for a different environment, though.

If you’re working in a Japanese office, odds are you’re going to be spending a lot of time there, what with the country’s notorious amount of overtime. So even if the lack of cubicles means Japanese offices feel less claustrophobic than their overseas counterparts at the start of your shift, after enough hours at your desk your workplace’s walls can start to feel like they’re closing in on you.

But Mitsubishi Electric has an idea on how to alleviate that unique kind of stress: add a fake skylight.

The Misola system is a display panel that creates the illusion of a skylight or window, with a view of a simulated blue sky. It’s not entirely decorative though, but functional too.

The outer edges of the “window” (actually the frame for the display) emit light, and so Misola is meant to be used to supplement, or even replace, a regular interior lighting system.

An especially clever design point is that only three sides of the frame light up, while the fourth acts as a visual shadow. By adjusting the amount of light produced by the other three sides, the system can create the sensation of the angle of light shifting as the sun moves across the sky, as well as replicate the differing color an intensity of morning, afternoon, and early evening sunlight. These changes can either be activated manually by the system’s user or programmed to occur automatically on a timed schedule.

Of course, you could argue that what stressed office workers really want is to be allowed to go home before it’s dark outside, not be patronized with a simulated sky to keep toiling away under. However, Mitsubishi also wants to install Misola panels in hospitals and assisted living facilities, such as senior citizens’ homes. For those people who have health or mobility issues that prevent them from going outdoors frequently or for long periods of time, this could be a way to help them ward off the depression and anxiety that can come from being cooped up inside for much, or all, of the day.

Mitsubishi is still putting the finishing touches on the system, but expects to have Misola ready to go on sale this October. If you happen to need a stress-relieving optical illusion right now, though, and don’t mind something much more low-tech, there’s always this to tide you over.